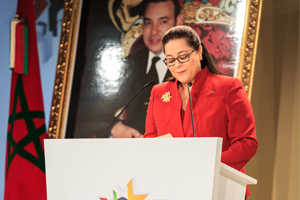 Thank you, Ms. Christine Kelly for your warm words. It’s a pleasure to be here.

November 19, a day that launches a movement where the world unites in support of women entrepreneurs!!! Let’s give it a huge applause!

I am very excited that so many impactful and motivated wo­men are gathered for this day here in Marrakech and around the world! Marrakech …known as a crossroad for cultures and civilizations…and for the first time, is led by a woman, Mayor Fatima Zahra El Mansouri! who deserves our reco­gnition today for hosting this important event.

Our goal today is to engage women and men globally to ple­dge their support to women entrepreneur or cause to sup­port their community with Talent, Time, or Treasure

The total number of women on the planet is around 3.6 Billion! Yet the World Economic Forum reports that no na­tion has yet to achieve gender equality. Although the share of women entrepreneurs is still below our aspirations all over the world as it is the case in Morocco, there is no doubt that the trends of the latest decade show a paradigm shift in terms women’s participation.

In Morocco, this favorable standing is fostered by key re­forms fully supported by His Majesty Mohamed VI. Among various initiatives: the reform of the Moudawana ( the perso­nal status code, also known as the family code, in Moroccan Law), and INDH (National Initiative for Human Development) that supported access of vulnerable groups, in their majo­rity women, to social and economic services, to name just a few. These efforts contributed tremendously to inducing a major change in the mind set of Moroccans.

In a region where 2/3 of the population is under the age of 30, YOUTH are definitely our major assets and undoubte­dly our main challenge. The job market, as it stands today, will not be able to absorb such a large number of job see­kers. There is now a great emphasis on promoting entre­preneurship to stimulate job and value creation. Luckily, the Young Generation or the Y-Gen, is by essence disruptive and aspires to be more engaging in innovative approaches to entrepreneurship.

It goes without saying that this new breed of entrepreneurs requires a set of measures and policies that will spur en­trepreneurship and it starts with Education and a favorable ecosystem.

As demonstrated by numerous studies, the key to the fu­ture for each country and each institution lies in its ability to attract top talents. Today, talent is ALMOST more impor­tant than capital or any other resource. Develop a gender approach in this area is not just a matter of equality; it is the gateway to success and prosperity in an increasingly com­petitive world. Thanks to entrepreneurship, many Moroccan women and others women around the world are self-employed and employ other women. As much as self-employ­ment is a way to a higher income, it is also and most impor­tantly a gain in self-esteem and dignity;

We, at CGEM—The General Federation of Enterprises of Morocco, walk the talk and made sure that women entre­preneurs are duly represented within the organization. Two major NGOs representing women entrepreneurs and wo­men in governance bodies, sit in the board of CGEM. Our efforts go to supporting women entrepreneurs in their effort to scale up their ventures by helping them access the 3 Ms: Money, Market and Mentorship.

Hence, as true believers that investing in gender equality and empowerment of women is smart economics, we advo­cate that governments and societies in the 144 countries that celebrate this day to support girls education with a focus on sciences, engineering, research and technology.

My pitch for today is to invite each and every one of you to take full advantage of our presence here to share and cele­brate the women who are pioneers and role models in the region and all over the world so that other women get inspi­ration, strength and know how to start their own ventures as well. Let us create a google spreadsheet where people can nominate their best local and national stories. We could also benefit from regional and national networks for col­laboration and support for women in Morocco, MENA and Africa – this will facilitate the exchange of knowledge, lear­ning and economic opportunities.

And my message to young girls is summarized in a quote by Johann Wolfgang Goethe that says: “Whatever you can do or dream you can, begin it. Boldness has genius, power and magic in it!” (end of quote). So dream lucidly, hope consis­tently, dare with passion, take risk with courage and engage with tenacity. Entrepreneurship is all of this at once!

To conclude, I would like to share MY dream … I dream that by Nov 19, 2020, we will celebrate as many women owned businesses as men’s.